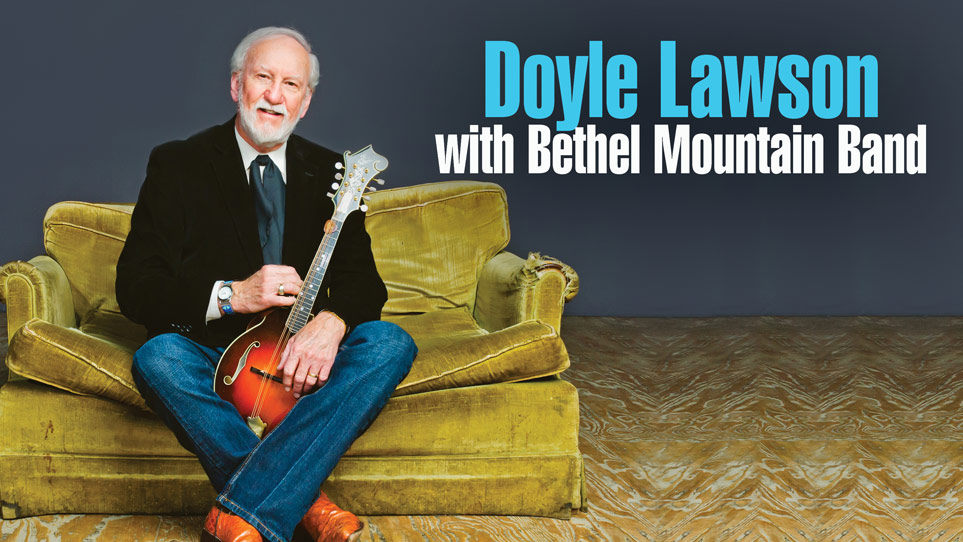 This concert or show has concluded.

I was born on April 20, 1944 in Ford Town, a part of Sullivan County, near Kingsport, TN, to Leonard and Minnie Lawson. I have two brothers, James and Les, and one sister, Colleen.

As far back as I can remember, I loved the sound of music. Just about everyone listened to The Grand Ole Opry, and our family was no exception. Though I listened to all the stars on the Opry, the group that impressed me most was Bill Monroe and His Blue Grass Boys. His music was different, more intense. High lonesome is the term we used for it. I could hardly wait for Saturday nights to arrive so I could listen. I decided early on that I wanted to play that kind of music.

My father, mother, and sister all sang gospel music when I was young. They were members of trios and quartets that sang a cappella music in churches and at revivals, and such. No doubt, that was where I acquired my love of quartet music.

When I was 11 or 12 years old I expressed an interest in learning to play the mandolin, so my Father borrowed one from one of the members of their quartet, Willis Byrd so I could try. I mostly taught myself to play by listening to the radio, a few records, and watching the occasional TV show. I eventually returned that mandolin to Mr. Byrd, and years later, he gave it back to me at one of the first concerts Doyle Lawson & Quicksilver played in Sneedville, TN. I still have it.

I met Jimmy Martin when I was 14 years old. He is from Sneedville, TN where we had moved to in 1954. Around that time, I made up my mind that I wanted to play music for a living, and realized that only playing one instrument was somewhat limiting, so I made it a point to learn how to play the banjo and guitar, too. Four years later, in February 1963, I went to Nashville and got a job playing banjo with Jimmy Martin. In 1966, I started working with JD Crowe in Lexington, KY. I first played guitar and later switched to mandolin. In 1969, I was back with Jimmy Martin for about six months playing mandolin and singing tenor but then went back with J D Crowe until August of 1971. I started with the Country Gentlemen on September 1, 1971 and stayed with them until March 1979. By this time, I had played in bands for more than 10 years, that had their "sound" before I joined them. I wanted to put together a group that would have "my sound."

To that end, in April 1979, I formed a group that I first named Doyle Lawson & Foxfire but soon changed to Doyle Lawson & Quicksilver. I was looking for "our sound" and that first group tried many different types of songs. I wanted a strong quartet like the ones my dad used to sing with. In the next few months, Terry Baucom, Jimmy Haley, Lou Reid and I laid the foundation for what has become the Doyle Lawson & Quicksilver sound. The makeup of my band has changed many times in the last 27 years. I jokingly tell folks that Doyle Lawson & Quicksilver is the "farm team" for bluegrass. I try to integrate each member's special talents into my group, while not sacrificing the Quicksilver sound. While the sound changes a bit with the introduction of a new band member, it is important to me that people hear what they expect to hear when we take the stage, no matter who is in the group.

My Father passed away in 1994, but my Mother still lives in Kingsport, TN, only thirty minutes from us. Suzanne, my wife, and I were married June 24, 1978. I have one son, Robbie, and we have two girls, Suzi and Kristi. Robbie and his wife, Carla, live in Kentucky. Suzi graduated from King College and works for the Daymon Corp in Meadowview,VA. Kristi attended King College for 2 years and is trying to finish up her education at the University of Tennessee in Knoxville. We live close to South Holston Lake and enjoy the solitude of the water and mountains. Suzanne bought a small sailboat last fall and when I'm home and there is a breeze, we sail. I collect western memorabilia of Roy Rogers, Gene Autry, etc. I also enjoy looking at old cars, and I recently bought a 1946 Ford Coupe. It has been restored from the ground up and I'm enjoying riding around town in it.

We are all members of Cold Spring Presbyterian Church and while Suzanne and Suzi are there almost every Sunday, I miss a few when I'm out on the road. I love golf, and play every time I have the opportunity. We have a Men's Bible Study on Tuesday mornings and if I'm home, I try and make Bible Study and then several of us play golf.

I have been hosting the Doyle Lawson & Quicksilver festival in Denton, NC for more than twenty-five years. A few years ago we started a golf tournament on Thursday, the week of the festival. I'd like to be able to say we were defending our title every year, but we aren't (just wishing).

The gospel music that we record and perform on stage has always been important to me. Doyle Lawson & Quicksilver have made many more gospel recordings than secular ones. It is apparent to me that the folks who buy our music and come to our concerts feel, as I do, that there is no better message than the message of Jesus Christ. On the first Sunday of May, in 1985, I rededicated my life to our Lord Jesus. It is my fervent hope that my "musical mission" will lead others to Him.